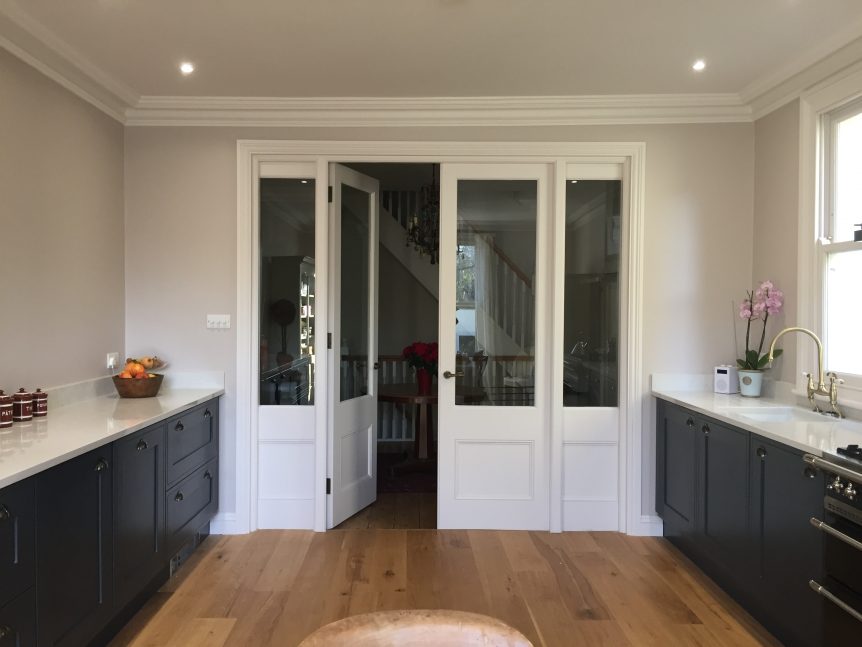 We recently moved house, with the intention of immediately knocking through three tiny rooms to create a large kitchen in which we could relax and entertain.

Finding a builder to do the knock-through was the easy bit.

Getting the kitchen we desired took a lot more time and effort – but the process was surprisingly enjoyable.

Here’s what I did:

Started with a wad of graph paper.

I’m no mathematician (ask anyone!), and no draftsman. But I’ve done this before when plotting out alterations to previous bathrooms and kitchens and I know that life is much easier when you can use to-scale cut outs of the units and appliances you want to install and fit them into the space you’re going to have

Used my tape measure, over and over again.

I was plotting the new space before the knock-through had happened, and it was hard to imagine not having those walls and doors in situ. I had to keep measuring to convince myself I really was going to have the large room I imagined.

Read any quality interiors magazine and you could be persuaded to believe that all lovely kitchens start at around £20,000 for units alone. This is a myth. I obtained quotes from Howdens and Homebase. I explored Ikea, Foxstow Shaker Doors (who will make doors for Ikea cabinets), and Just Click Kitchens.  In the end we plumped for DIY Kitchens, which offers a bespoke colour service and supplies units ready assembled. We ordered sample doors to check out style and quality, though we had to trust that our chosen bespoke colour would work.

I loved the look of this Farrow & Ball painted room…

But a useful conversation with a member of our local F&B showroom staff persuaded me there was a risk that the Dead Salmon could look too clay-y in our interior. Depending on the light and space, it can look pink, beige, or brown…. And may, she said, be an uncomfortable tone to behold after exiting our Cinder Rose lounge – the pinker pink of the lounge inevitably rendering the Dead Salmon more brown. She showed me Peignoir, a romantic grey-pink that gives a similar look – and that’s what we finally chose.

A luxury though it is, I loved the idea of a marble worktop, and DIY-Kitchens offers a vast range of white and grey marbled quartz surfaces. I ordered about seven samples before deciding on Silestone Lagoon.

This was time well spent as it meant we ended up with a very practical layout. It includes two large (900cm) deep drawer units, integrated fridge, pull out waste bin unit, dishwasher, and 500cm drawer unit, along with two simple cupboards housing the sink and the new electrics board. The two large drawer units and the pull out bin cupboard also have hidden drawers for extra storage – ideal for cutlery, bits and bobs, and chopping boards.

DIY-Kitchens has a great customer service dept, and I was on their back asking things like, “Can I place a unit directly next to the range cooker?” (The answer was no – in fact – so I’m glad I thought of that. The recommendation was to put a 10cm filler panel between oven and cupboard).

Let the kitchen dominate my headspace

Allowing thoughts about tiny details to creep into my every waking moment prevented problems that could so easily have occurred. For example, realising that a pull-out unit would crash into the architrave of the large double doors if we didn’t install another of the useful 10cm filler panels between the unit and the wall.

We wanted to create a feeling of grandeur and airiness, with double doors shedding light on the darker inner hall area. I looked at many off the shelf doors before realising we would have to pay extra and have bespoke doors designed for us if we were to get the look and size that we wanted. They were built for us by the London Door Company.

Shopped around for accessories.

after weeks of vacillation, I committed to a range of base units in DIY-Kitchens’ Welton bespoke, painted in Farrow & Ball’s Railings, F&B Peignoir on the walls, F&B Great White on the ceiling and woodwork, and a commercial quality brushed and UV oiled engineered oak wooden floor from Maxam Flooring. The fridge is Bosch (they make the largest capacity under counter fridges) and the dishwasher is a Miele, a brand we’ve always had and trusted.

What could possibly go wrong?

We’ve been lucky… So much can go wrong, even when you employ a kitchen designer. I recently heard of someone who’d paid for an uber-expensive designer kitchen, only to be unable to pull drawers open because they crash into the super expensive Wolf range cooker! When we designed our own kitchen we could easily have missed the fact that drawers would bump into the architrave. But a designer could have made the same mistake – and that would have been SO annoying!

Five months on, we have a few tiny scratches on the painted units – but these were obviously anticipated by DIY-Kitchens as they sent a small pot of touch up paint with the order. The main problem has been our waste bin unit – one morning it collapsed off its interior, and was sitting like a smelly old beached whale in the middle of our kitchen. It turned out it to have an inadequate number of screws holding the runner to the interior unit. Fortunately we managed to fix it with new screws. We’ve also had a couple of problems with our tap – and again we have had to solve these ourselves…

We have chosen an inexpensive kitchen. We spent equal amounts on the units, the huge French doors, and the quartz work surfaces. A lot of people spend a lot more on their units than we did (ergo all the hugely expensive kitchens in the interiors mags) but, so far at least, we are delighted with our new kitchen. And by designing it ourselves, it is exactly the kitchen we want.

How to mix orange, pink and red in your interior