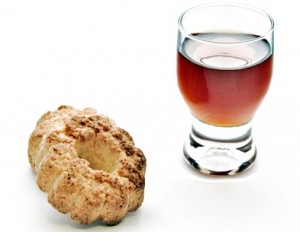 A large glass of wine contains the same number of calories – 200 – as a doughnut. Will this information, if displayed on our bottles, A) have more impact on reducing your alcohol consumption than the existing health warnings? Or B) surprise you that there aren’t more calories in a doughnut, so you may as well have one of those too?

Booze is not good for us – whatever we may try to tell ourselves to the contrary. I know many people who justify their wine drinking by saying, “Ah, but it’s good for me” – but I bet they wouldn’t be saying that if it didn’t taste so nice and didn’t make them feel so good. Would we all be knocking back hot Bovril or Horlicks if the same health benefits were claimed?

The truth is that a very small amount of wine may indeed be beneficial. A new study from Stockholm’s Karolinska Institute has found that drinking between three and nine alcoholic drinks a week will reduce your risk of stroke by 11% – and that’s even better than regular exercise, which cuts risk by 9%!

But three to nine alcoholic units a week is a very small amount – and even though these benefits have been shown for stroke risk, any amount of alcohol has been shown to increase your risk of breast cancer more than the much demonized HRT.

You may have noticed that while cigarette smoking has long since disappeared from TV dramas (with the exception of Call The Midwife, where the doctor and his ex nun wife regularly enjoy a healthy fag), drinking remains de rigeur. Booze is the acceptable drug and nobody really seems to care if it ups our risk of breast cancer, diabetes, liver disease and memory loss – things that may or may not happen some years in the future. But will we care more that it adds inches to our waistlines – something we can see almost immediately? It certainly made me stop and think.

I would never eat a doughnut, yet I think little of pouring a second glass of wine – apparently doing as much damage to my weight. And it’s not just the calories in wine that make it so fattening. Alcohol impairs glucagon production and, as obesity researcher Zoe Harcombe points out: ‘when the body can’t release this hormone effectively we get the munchies’.

I definitely find wine an appetite stimulator: I am far more likely to take a second helping of supper, or to follow my meal with cheese and biscuits when I’m drinking. It’s not that I’m truly hungrier – I am simply enjoying the whole process of food and wine and chatter. My inhibitions are down and I am tucking in with gusto – and adding far more than the equivalent of a single doughnut to my calorie count.

A single gin and diet tonic = 55 calories, the same as a thin slice of bread.

A small glass of champagne = 90 calories, the same as an apple.

A standard glass of wine = 130 calories, the same as a piece of chocolate.

The poison on your plate