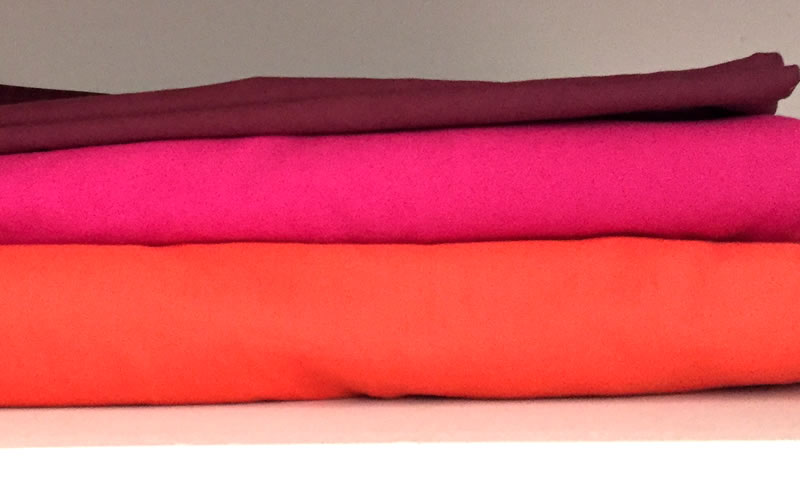 Browsing in a florist’s shop, my friend picked up a bunch of pink tulips and was looking for something to go with them. Without a second thought I pointed to a bucket of the same flowers – in dark red… My friend was appalled. ‘No, no, no!’ she said, sending a shiver of embarrassment through me.

As a young child the same thing had happened to me. I’d turned up at a friend’s house with my Tiny Tears dressed in my favourite combo for her – orange pants with a red shirt. My hostess was as appalled as the friend in the florist’s shop. ‘You can’t put red and orange together!’ she sneered. ‘They clash!’

She swore blind that if my doll was wearing a red top, the only permitted colour for her pants was navy blue… Shamed, I cast my love of orange (and pink) with red aside.

But a couple of years ago, I stumbled across a gorgeous throw in Designer’s Guild. It is pink, orange and red.

Shopping for bedding in Galeries Lafayette in Paris earlier this year, there was a 70% reduction on pink and orange duvet covers and sheets – and we bought dark red pillowcases to go with them. They look fab with our Designer’s Guild throw, and Designer’s Guild cushion, also in pink and red (with a touch of blue).

After dismissing my suggestion of red tulips to go with the pink ones, my friend turned to the florist for advice. The woman had missed the pink-red controversy, having been busy tweaking a bouquet at the back of the store.

She looked at my friend’s pink tulips and, without a moment’s hesitation, said, ‘Put them with red.’

By the time my friend got her tulips into a vase and onto her table she adored them.