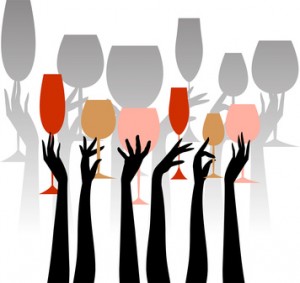 As I do not have a religious bone in my body, my Lent abstinence was destined to fail. I’d embarked on it with the promise that I would make an exception for my trip to Rome (just a few days into the 40-day booze fast), and possibly also a press trip to muslim Dubai, where I correctly guessed that the parallel world of corporate entertaining would make it impossible – nay rude – to decline the flow of wine in this Muslim country; albeit I’m still looking for an excuse for the glass of wine on the flight out and – er – the whiskey from my friend’s mini-bar.
Apart from those detours, not a drop passed my lips – until yesterday, when Steve and I ate lunch at Little Social in Pollen Street where I washed down a langoustine, stone bass, and chocolate moelleux with the house white….

Twenty minutes later, turning into South Molton Street, we were nabbed by a very charming young man who instantly detected my nails au naturel… And the whiff of alcohol on our breath. He was the young manager of the Sakare skin care shop – and, though I am normally a dab hand at brushing off anyone begging me to “step this way for just a minute”, seconds later we were watching him buff my finger nails to an oily shine with the amazement of a Derren Brown audience.

You may find this genuinely hard to believe – but I had never come across one of these nail buffer blocks that my youngest daughter says are routinely given away free with magazines, the source of the one she has owned for the past four years… I’m sure the salesman found it hard to believe too… My hands were literally putty in his as he showed me how his magic block could restore my nails to full shiny health. And then, the kill: No, they don’t sell these alone – only with our hand and nail kit of cuticle oil, hand cream and let’s not forget the nail file… I have bought nail oils before, which languish unused in my bedside drawer, also home to many jars, tubes and bottles of hand cream. But, as the only people in London (“Londoners really? Born and bred? Honestly? What a change to meet someone who is not a tourist!”) not to have seen a nail buffer on sale for pence in our local Boots, or free on a magazine cover, we parted with £35 – my husband having bargained the salesman down from £40. Back home, despite Bella’s “Oh no, how much did you pay for that?” we have had fun buffing nails and squirting on oil and hand cream.